Rare Birds To Look For In Your City Park

You must have seen birds everywhere, but have you had a chance to look at the rarest birds in America? Many national parks and state parks are home to rare species you can’t find anywhere else. If you’re traveling around the U.S., don’t forget to take up the adventure to see some of the country’s most extraordinary birds.

The California Condor is the most seldom seen bird globally and the largest bird in North America. Native Americans consider California Condor very sacred, which is the biggest reason for its near extinction. Due to poaching and other human activities, this bird was nearly extinct. Another reason for the destruction of this species is said to be poisoning by lead and DDT. These birds have grown 240 in the wild in the Southwestern U.S. and Mexico through the reintroduction process. You can spot a California Condor in Grand Canyon National Park, Zion National Park, and Pinnacles National Park. They soar up in hot currents and do not fly very high, only about 3 meters, and are mostly black in color with white wing linings. All condors wear numbered wing tags.

The number of Whooping Crane dropped to just 15 in 1941 due to hunting and agricultural development activities. Historically, you could find these birds on North American Grasslands. Now the bird is making a comeback, though it’s still at risk. There are around 600 Whooping Cranes in North America. To get a sight of these birds, head to Arkansas National Wildlife Refuge’s marshes along Texas‘ southeast coast. This bird is about 1.5 meters tall, holding the crown of the tallest bird in North America. With a bright white body and red crown, this bird has red and black facial skin. In 2020, there were 826 Whooping Cranes, and 667 of them remain in the wild. 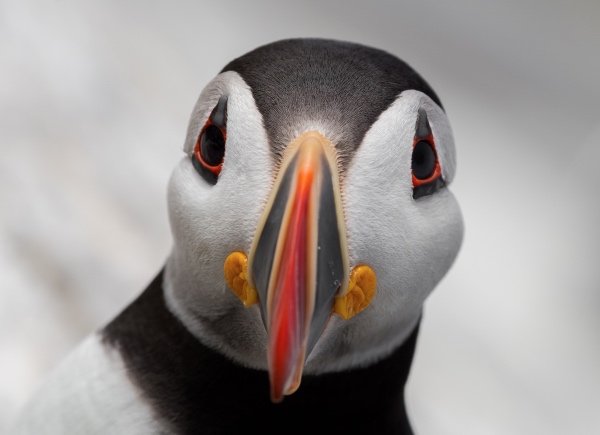 This short and stocky bird spends most of its life in the sea and is called a “sea parrot” due to its colorful beak. Puffins are excellent swimmers that use their wings to stroke underwater with a flying motion. Their rubber-like webbed feet support them to dive up to 200 feet under the sea, though for just 20 or 30 seconds. These birds have penguin-like body colors and a beautiful beak. Their beak loses color and turns grey in winters, and gets back to its original color once spring arrives. The best way to have a sight of puffins is traveling by boat. You can visit Maine Coastal Islands National Wildlife Refuge; tour operators make the daily trip there.

The Blue-Eyed Ground-Dove was extinct until it was spotted for the first time in the last 75 years in 2015. The small dove is named after its attractive blue eyes that match the spot on its body. The tawny plumage is a complete contrast to the blue eyes. You can only find the Blue-Eyed Dove in the tropical savanna of Brazil’s cerrado as it has lost its habitat due to industrialization growth. Since the dove was rediscovered, ABC and its partner Save Brazil have been working to find and protect the remaining individuals.

The Nene evolved from the Canadian Goose, can only be seen in Hawaii. Its population dropped to the drastic number of 30 by 1952 due to hunting and other species like Mongoose, wild pigs, and feral cats used to feed on the Nene. Due to the hard work and efforts to protect the Hawaiin state bird, the Nene has grown to 2000. You can have a sight of this rare bird at Haleakala National Park on the island of Maui or Kilauea points National Wildlife Refuge on the island of Kauai.

After researching and deciding for decades, this bird’s estimated population was 1800 in 2004. In just three years, hurricanes destroyed the population, reducing the number to only 23. In 2006, when Hurricane Mathew struck the islands of Bahama, it destroyed Bahama Nuthatch, and everyone feared they were extinct. While in 2018, researchers rediscovered the species. Currently, ABC is working with local partners to continue the search efforts. The Bahama Nuthatch is closely related to the Brown-headed Nuthatch. You can distinguish it with its long beak, white belly, shorter wings, and vocalization.

This endangered bird is a resident of central Texas. It is the only bird with a breeding range restricted to the state. The birds are endangered due to the lack of oak and juniper woodlands where they live and nest and the cowbirds that lay eggs in the Warbler’s nest. In 2019, the bird lost its protected status, but a judge upheld the decision to provide federal protection to the bird.

Despite the natural causes, destructions, and time many rare bird species have been rediscovered and conserved by researchers and authorities. In total, 25 endangered species have been rediscovered in the last 18 years, and the credit goes to the numerous conservation organizations that have been working on it. Keep an eye out for these rare birds next time you’re in their inhabited area.

The 4th of July is a time for celebration! People enjoy many traditional activities on Independence Day, such as watching fireworks, grilling out, and spending…

You may have seen people spreading sand on their lawns and wondered what the point is. After all, it doesn’t seem like it would do…

Read More »When To Use Sand On Your Lawn

Your lawn is an essential part of your home. Not only does it add curb appeal, but it also helps to keep your property looking…

The Benefits Of Exercising Outside